The Legend About The Norse Goddess Gefjun

Long before the world became as it is today, there was a King named Gylfi. The King presided over a vast territory and truly loved his land. He had created a powerful army consisting only of the bravest and strongest of women and men so that he could sleep peacefully.

But King Gylfi, so assured of the strength of his army, failed to see that the worthiest opponent he would ever meet looked nothing like he would have expected. Her name was Gefjun. She came from the East, in a carriage drawn by four magnificent oxen. She had dark eyes and black hair and, she was a woman to be reckoned with in all her dealings. People said about her that was greatly favored by fortune and the king offered her half his wealth if only she would stay. To the King’s surprise, Gefjun refused.

The King, so accustomed to endless admiration, was outraged. Surely there must be something amongst his riches that would please this mysterious woman. He approached Gefjun again, offering her as much land as she could plough in one day and one night. She accepted and set off with her oxen. Satisfied, the King retired to his longhouse.

When he awoke, Gefjun could not be seen anywhere but the earth was shaking and in the far horizon the king could see part of his land being torn off. By the time the king had gathered his army, Gefjun and her oxen had already dragged the landmass so far away that there was now an ocean between them. All the astonished king could do was to watch, as he lost both the woman he desired and parts of his precious land.

Thenceforth, Gefjun lived in her own land, happy and free and the King cursed the day he had tried to bribe her away from her independence. Therefore, in this time before remembrance, it was known that true affection can never be purchased and that it is always up to you to create your own promised land. 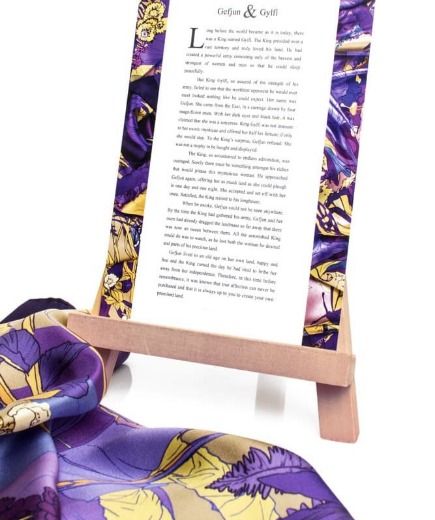 The story about the Norse goddess Gefjun and king Gylfi is inspired by legends with thousand-year-old roots. Gefjon, or Gefjun in Old Norse, means 'the giving one'. The goddess is mentioned in the poem Lokesenna from the Poetic Edda, as well as in Vǫlsa þáttr from Flateyjarbók.

The Icelandic scholar Snorri Sturluson chose the legend about Gefjun to be the first tale of his Edda, the Prose Edda. In his version of the saga, the indentation from Gefjun’s ploughing resulted in Lake Malar, on the Swedish east coast, and the landmass became the Danish island of Zealand, upon which the city of Copenhagen is located today. According to Snorri, Gefjun came "from the East" and finally settled down in Lejre, Denmark.