-HOW VIQUEENS AND VIKINGS CELEBRATED YULETIDE A THOUSAND YEARS AGO

First of all, despite the heading of this post the Viqeens and Vikings of ancient Scandinavia and Iceland, did not “celebrate Yule” per se. Rather, the earliest known written reference[1] to heathen Yule celebrations mention the phrase ‘to drink Yule’. So, it is fair to say that the festivities involved drinking to some extent... And even if it is uncertain what exactly was celebrated during the Yule drinking we know that there was a Jólablót, a “Yule Sacrifice”, and much feasting, songs, and games. 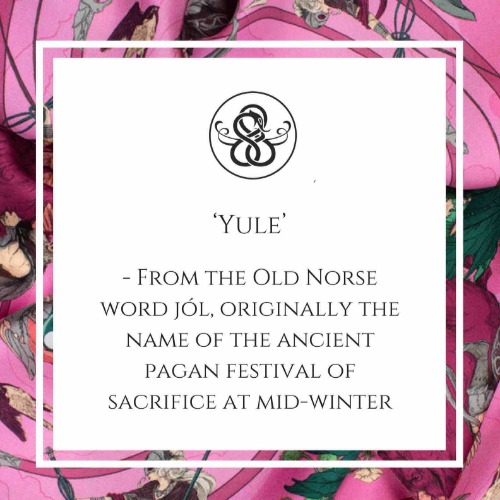 What else do the thousand-year-old poems, inscriptions, and scrolls reveal? Personally, I find it interesting that the Norse god Odin is also known as Júlfadr, the Yule father. In fact, the whole month preceding the midwinter solace is named Ylir in Old Norse, meaning Yule month. None of the Scandinavian languages, including Icelandic, have adopted a Christian name for the festivities during this time of the year but unanimously kept the Old Norse word jól/jul/júl.

The old myths reveal that the people of ancient Scandinavia and Iceland turned to the goddesses, gods, ancestors, and spirits for guidance through the darkness and cold to yet another season of light and warmth. Due to the darkness, and since Yule begins with the winter solstice; it is fair to assume that the goddess Night and, her colleague the goddess Sun, have been of importance in the celebrations. The day of the winter solstice is the shortest day of the year, a time when the sun can be seen for only a few hours or, in some parts of the north, it can barely be seen at all. Even these days, Swedes hold a festival of light, nowadays with the Christian name Lucia, to outweigh the winter darkness. After the winter solstice the sun goddess returns, and little by little our days grow longer again. It is also important to bear in mind that to the people of ancient Scandinavia the darkness was not of evil. The goddess Night is the mother of the god Day, and as such, the force giving life to light.

THE NORSE GOD THOR AND HIS (YULE) GOATS

The darkest winter month was nevertheless a time when the borders between the realms were weakened. To safeguard oneself one should offer gifts to the powers protecting us: ancestors, protective spirits and other deities. One of the more famous Norse gods, Thor, was the one protecting the realms from destructive and chaotic forces. Apart from his hammer, Thor is known for the two goats that pull his chariot - and one thousand years later most Swedish households have a Yule goat made of straw standing by the Christmas tree. So, perhaps Thor and his goats played some part in the Yule festivities, possibly in the role of protectors until the return of the goddess Sun.

Celebrations – just as legends and stories – are great ways to connect with our history, our foremothers and our forefathers. Even if we don’t celebrate the merriments in the exact same manner as they might have done, there are still more things connecting them to us than not. Ultimately, Yule is about the same things today as it was a thousand years ago: family, friends, festivities and – if you live here in the north - finding light enough until the return of the sun.

I wish you all god jul!