The Legend About The Norse Goddess Thrud

Long before the world became as it is today, there was a black elf whose name was Alvíss, meaning the all-knowing, and he was indeed a very clever creature. One day, in the days now long departed, Alvíss arose from his home under rocks and stones and headed towards Thrudheim, meaning place of might. Here dwelled Sif, the goddess of the abundance of earth, and Thor, the god of thunder, lightning, winds, rains and fair weather. This divine union of an earth goddess and a sky god had resulted in a most beloved daughter, the battle goddess Thrud.

As soon as Alvíss arrived in Thrudheim, he boldly suggested that Thrud should be his bride. Thor, known for his hot temper and fierce physical power, found Alvíss to be a foul, pale creature and had no patience for such insults. Thor reached for his hammer Mjölnir to make the visit short when Thrud intervened. Thrud, whom just as her father was a strong-armed warrior albeit perhaps a bit more astute, answered Alvíss ‘For a creature with such a name you have behaved quite foolish since I am no one’s to claim and I decide my own fate. But, despite your mistake, I will grant you my hand if you succeed in answering all of my questions correctly.’

Thrud, whose name means strength in Old Norse, had realised that perhaps this was an opportunity to benefit from the immense knowledge Alvíss possessed. So, she proceeded by asking one question after another, and as evening became night, Alvíss shared his infinite knowledge. Finally, the sun rose and – because he was a black elf – Alvíss turned to stone as soon as the first rays of sunlight touched him. Therefore, in this time before remembrance, it was known that it is always favourable to use one’s wit rather than physical strength, and most importantly, that the pursuit of knowledge is never-ending. 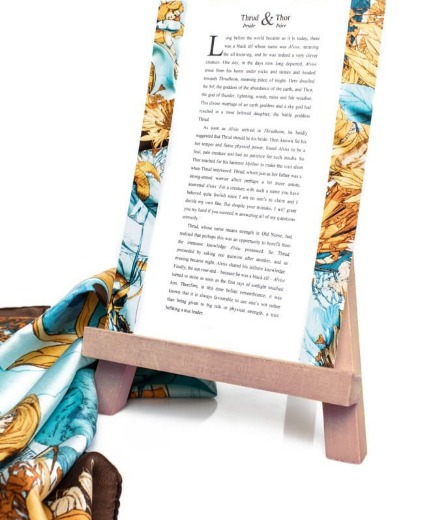 The story about the Norse battle goddess Thrud is inspired by the poem Alvíssmál,  cited in the Poetic Edda. In the poem, it is Thor who converses with the black elf until sunrise. In this version of the story Thrud gets to speak for herself, as a battle goddess we believe she should - and can. Also, Alvíssmál is the only tale depicting Thor solving problems using his wit rather than physical force, which makes our version even more plausible.

The goddess Thrud is attested in several sources, and Thor is sometimes referred to as ‘the tough father of Thrud’ or as in the poem Thorsdrapa, ‘he who longs fiercely for Thrud’. Thrud is also mentioned on the Karlevi stone, located on the island Öland, Sweden. The rune inscription tells us about a chieftain having ‘done the deeds of the battle goddess Thrud’ meaning having been a true and great leader.