- THE STORY OF mighty maidens & HOW THE SEA BECAME SALTY

Long before the world became as it is today, in a time when the sea was not yet salty, lived two mighty maidens. Their names were Fenja and Menja.

Fenja and Menja played together as young children. Their games were of a peculiar kind for they enjoyed throwing huge rocks. As the years past, they grew stronger and stronger and eventually they could lift mountains. Due to their unparalleled strength, the maidens soon became famous warriors, and Fenja and Menja aided several great chieftains. 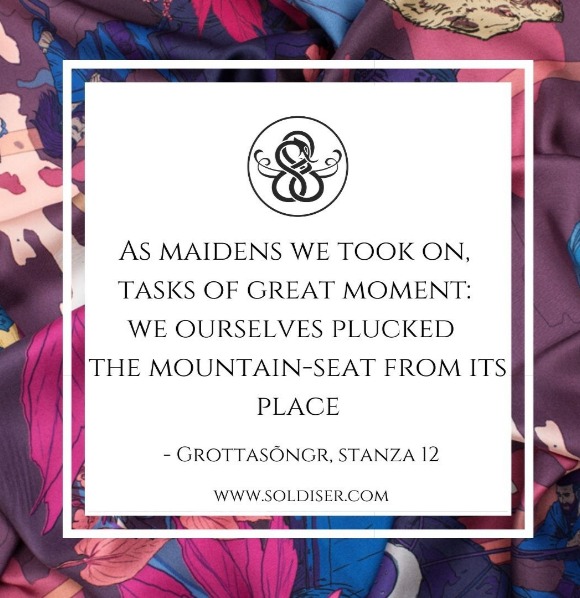 Without the support of these powerful women, many a queen and king had not been able to rule. Fenja and Menja performed many great deeds until the day came when their luck abandoned them. They lost a great battle and Fenja and Menja were captured.

The mighty maidens were brought to the realm of King Fródi. The King owned two mill-stones, so gigantic that no one was strong enough to turn them. The mill was called Grótti and quite extraordinary for it would ground whatever the person turning it was singing about. King Fródi had heard of Fenja and Menja’s strength and he praised his luck in having captured them. The women were led straight to the mill, and the king demanded them to grind gold, peace, and happiness. Perhaps Fenja and Menja had grown tired of battles and fights for they followed the king’s order. They began to grind and sing, and the people in the realm of King Fródi enjoyed such peace and gladness as no one had ever known. People called it the Peace of Fródi. No one injured anyone, there were no thieves or robbers, and a gold ring could lay in plain sight but stay untouched by strangers. So it could have remained had it not been for the king’s greed.

“We have ground treasures and joy. Fródi sits on gold, he sleeps in feathers, and he wakes to bliss but is not yet content. Now is peace and wealth in this realm and I deem that our work is done”.

“Yes,” agreed Fenja. “Fródi sees no further than our strength and the bounty it grants him. Clay eats our foot-soles and the cold chills us. We turn this peace-grinder yet our life is gloomy at Fródi's. Our hands must rest, and this stone must halt”.

Then Fenja and Menja began singing a different tune than before. They sang of an enemy army, of iron, fire and Fródi's loss of power. That very same night a sea-king called Mýsingr and his fleet disembarked on Fródi's shores. They took much spoil, King Fródi died in battle, and so the Peace of Fródi was broken.

Fenja and Menja had ground but a little while, when the poles trembled, the massive boulder burst and down sank the entire ship. And from that time there has been a whirlpool in the sea where the water falls through the hole in the mill-stone. It was then that the sea became salt. No one knows where Fenja and Menja are today, but it is known that not even the sea could break these mighty maidens.

Therefore, in this time before remembrance, it was known that where there is no appreciation there will never be true gladness and it will grant you no joy to be mastered by others.